Last night was the Golden Globes and all the stars were out in their black tie best to celebrate the occasion.  I think its fair to say that the evening was full of plenty of glam!  I of course wanted to do a Golden Globes red carpet style report to discuss the trends and best dressed of the evening.  My best dressed of the evening was new comer and instant style icon, Lupita Nyongo’o in a stunning red Ralph Lauren caped gown.  Which brings me to my first big trend – the color red.  Various shades orangey undertones to deep red with blue undertones – these ladies put the red in red carpet! 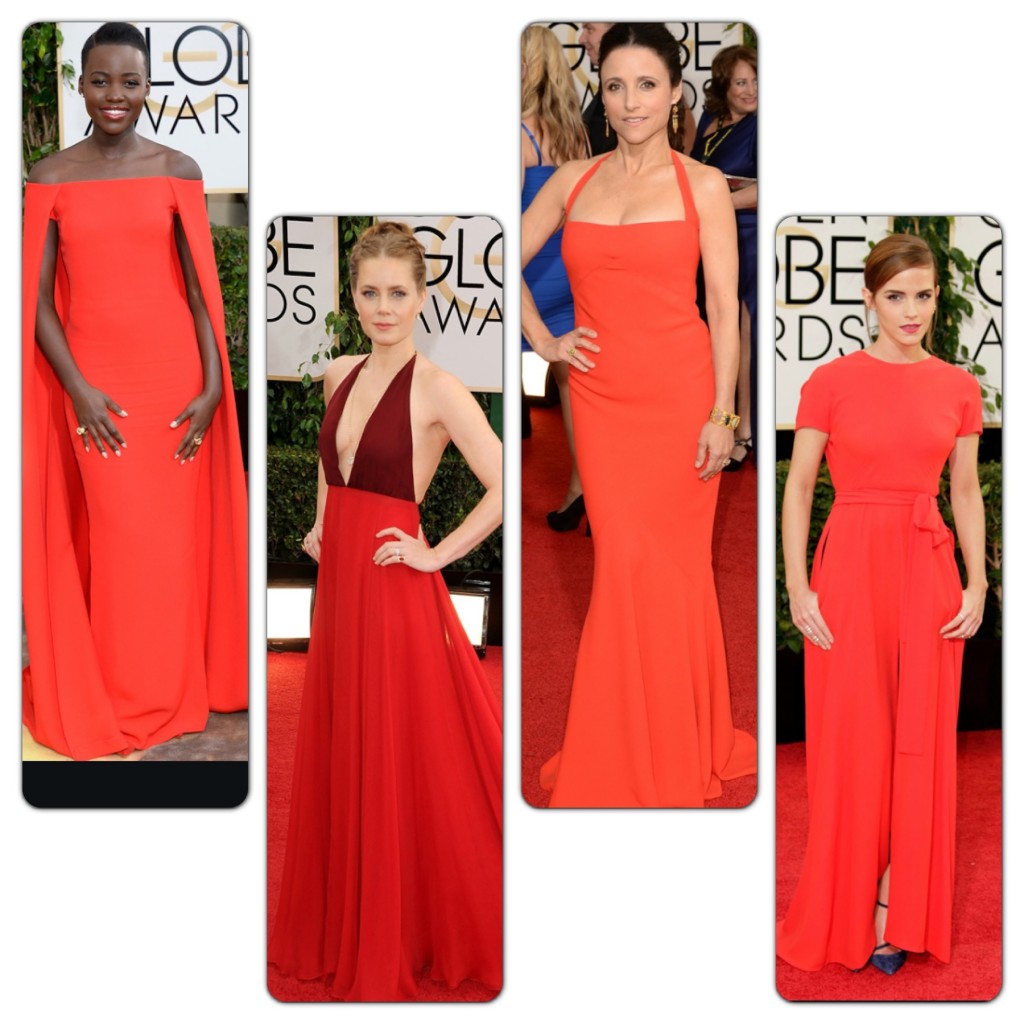 I would like to do an extra shout out to Emma Watson for her fashion risk of wearing a look that was dress in the front but layered over trousers and open in the back – it was daring, yes, but modern and completely age appropriate – she was absolutely one of my favorites!

Another huge (unsurprising) his of the evening was black.  No ordinary black, there was lace, tulle, beading, embellishment, gold accents and plenty of curvy silhouettes.  These were not your safe little black dresses – these were statement dresses (hello Sofia Vergara and Cate Blanchett – 2 more favorites).  These ladies put the black in black tie fabulous! 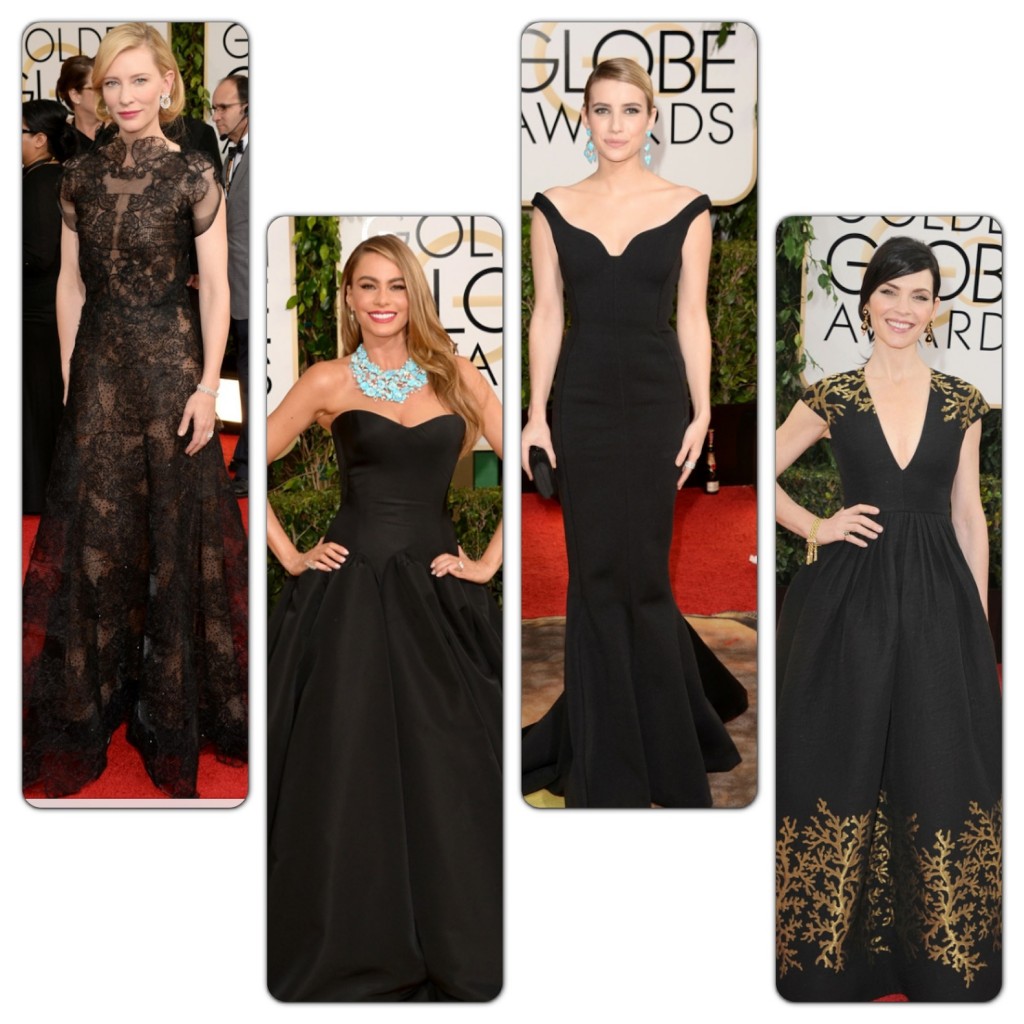 Another white hot trend was shades of light (as I call it).  The golden globes red carpet style could be seen from the moon it was emitting so much light.  There was white, cream, pale golds, nudes and silvers – whatever creative name you want to put on it – these gowns were glorious, ethereal and glowing.  2 of my favorites Naomi Watts (in Tom Ford) and new comer Margot Robbie (in Gucci) absolutely killed it in their body skimming light gowns.  Once again, there was nothing basic about these shades of light – there was lace, organza, beading and all the adornment you could expect from the biggest stars on one of the most prestigious red carpets… 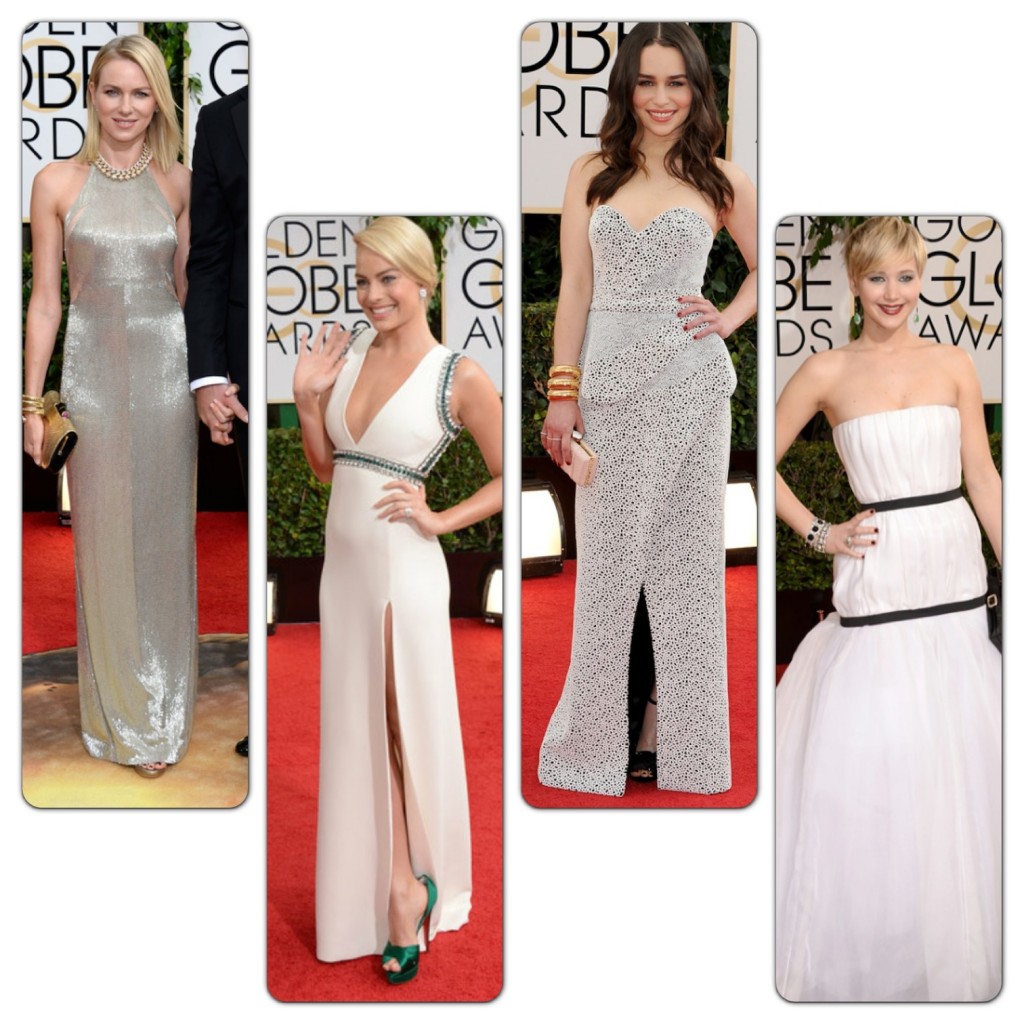 While we’re talking about color, I need to talk about the color green – it wasn’t everywhere but it was pretty and present and in various hues and silhouettes.  I say silhouette because green was the color that two of my favorite expectant (and incredibly glamorous) ladies chose to style their bumps.  I am talking about Kerry Washington in the palest green Balenciaga and one of my very favorites of the night, Olivia Wilde in a sparkly Gucci gown.  I hate to use so many lame puns – but I was green with envy! 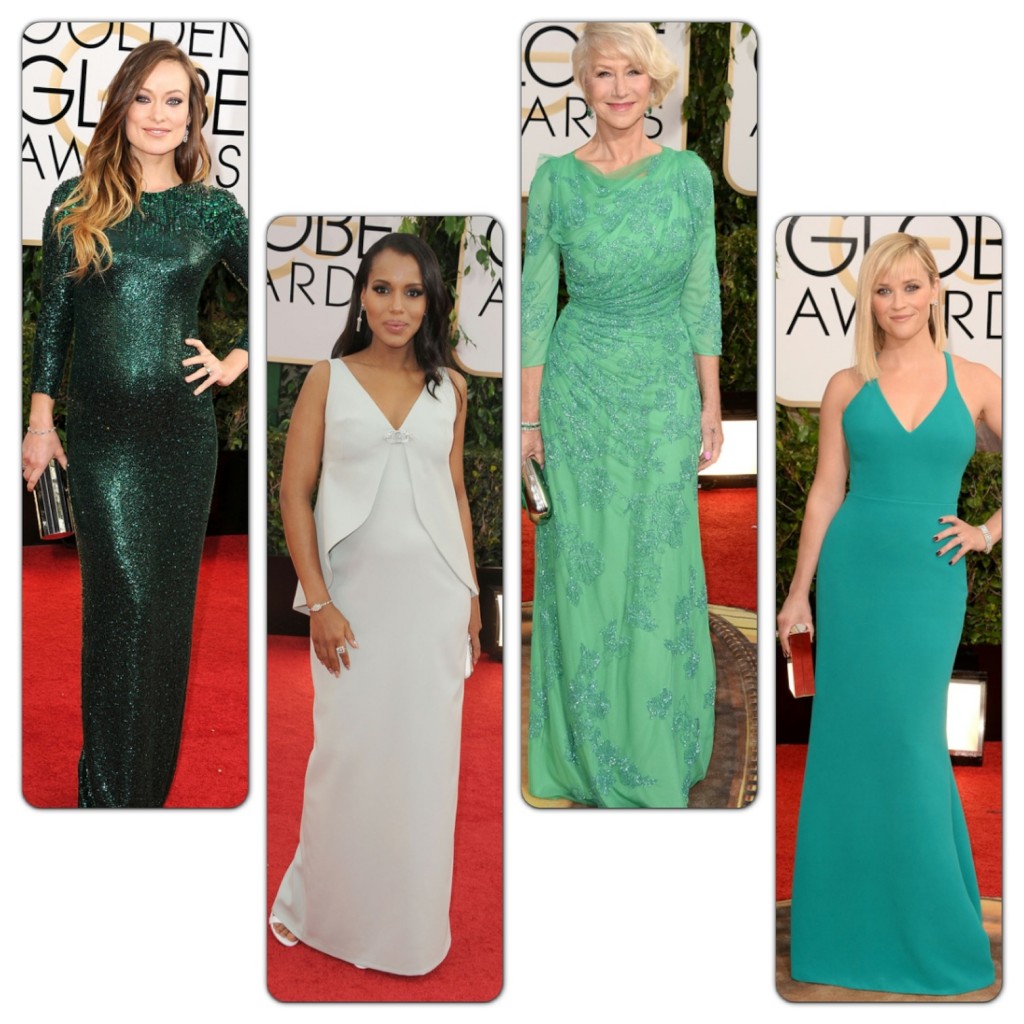 Another hot Golden Globes red carpet style trend was color blocked gowns!  Color blocking has been a popular trend for a number of year but seeing it at the highest level in these incredible gowns was jaw dropping.  Yes, there was lots of black and white together – but the use of colors – both contrasting and tonal was magnificent and fresh.  Amy Adams absolutely killed it in Valentino Couture gown – another of my favorite looks – which featured 2 of the hot colors of the night – red and red!  This was definitely a big red carpet trend and great for ladies who are torn on what color to wear… 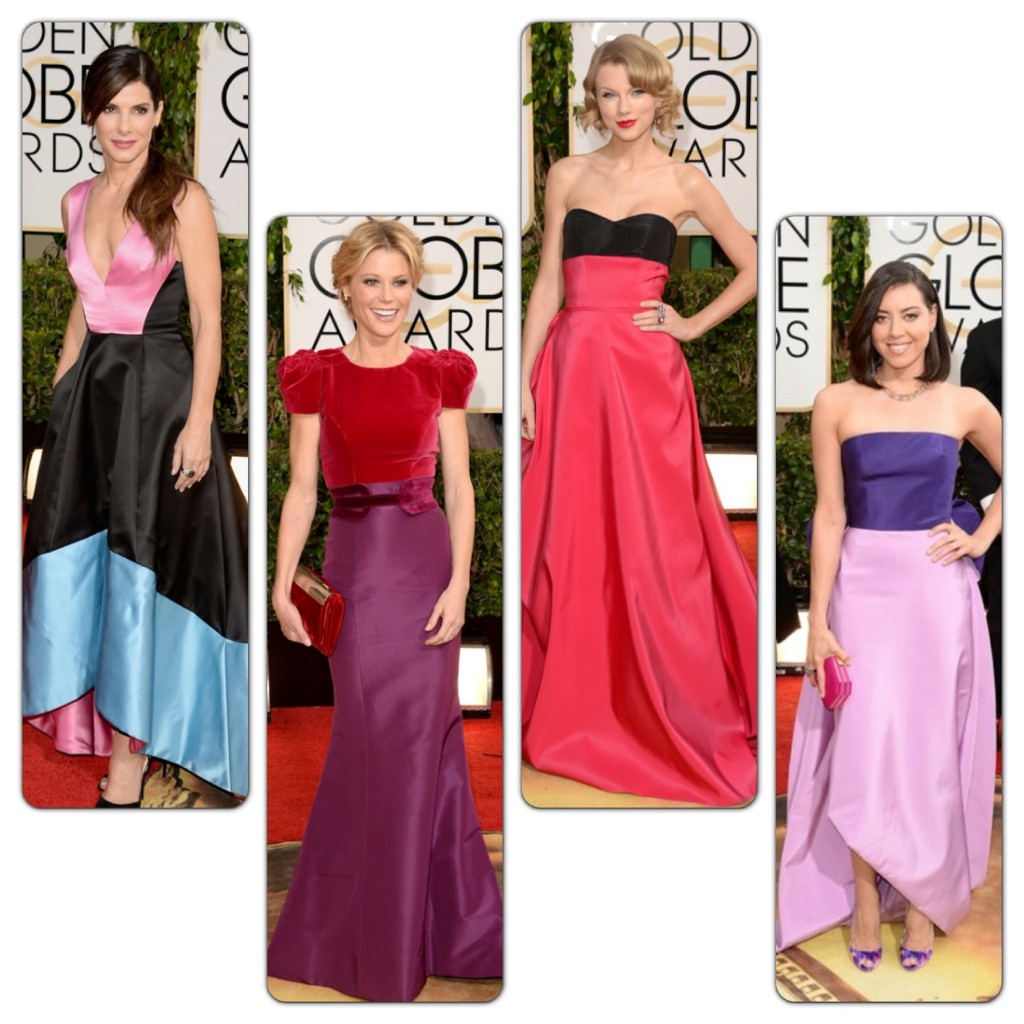 Finally, I want to talk about the surprise scene stealers of the night… I’m talking about shoes baby!  That’s right, most shoes don’t get much air time at these black tie red carpet events… These gorgeous heels are usually hidden behind layer so fabric which musty be frustrating for shoe designers and uncomfortable for the celebs wearing these incredible shoes without getting to show them off! This year we got lots and lots of shoe sightings on the Golden Globes red carpet thanks to some thigh high slits (thank you Amber Heard and Margot Robbie) but designers were definitely experimenting with some high low hemlines.  Everyone from Sandra Bullock, Zoe Deschanel to the expectant Drew Barrymore showed some ankle and shoe love in these high low hemlines.  Furthermore, there was more tea length than usual (which cuts just below the knee) which Sarah Paulson showed off in Marchesa as did Emma Thompson who actually came out to present an award carrying her sky high Christian Louboutins proclaiming the red was actually her blood.  So, congratulations to all those amazing shoe designers out there who finally got the exposure they deserve at these black tie events! 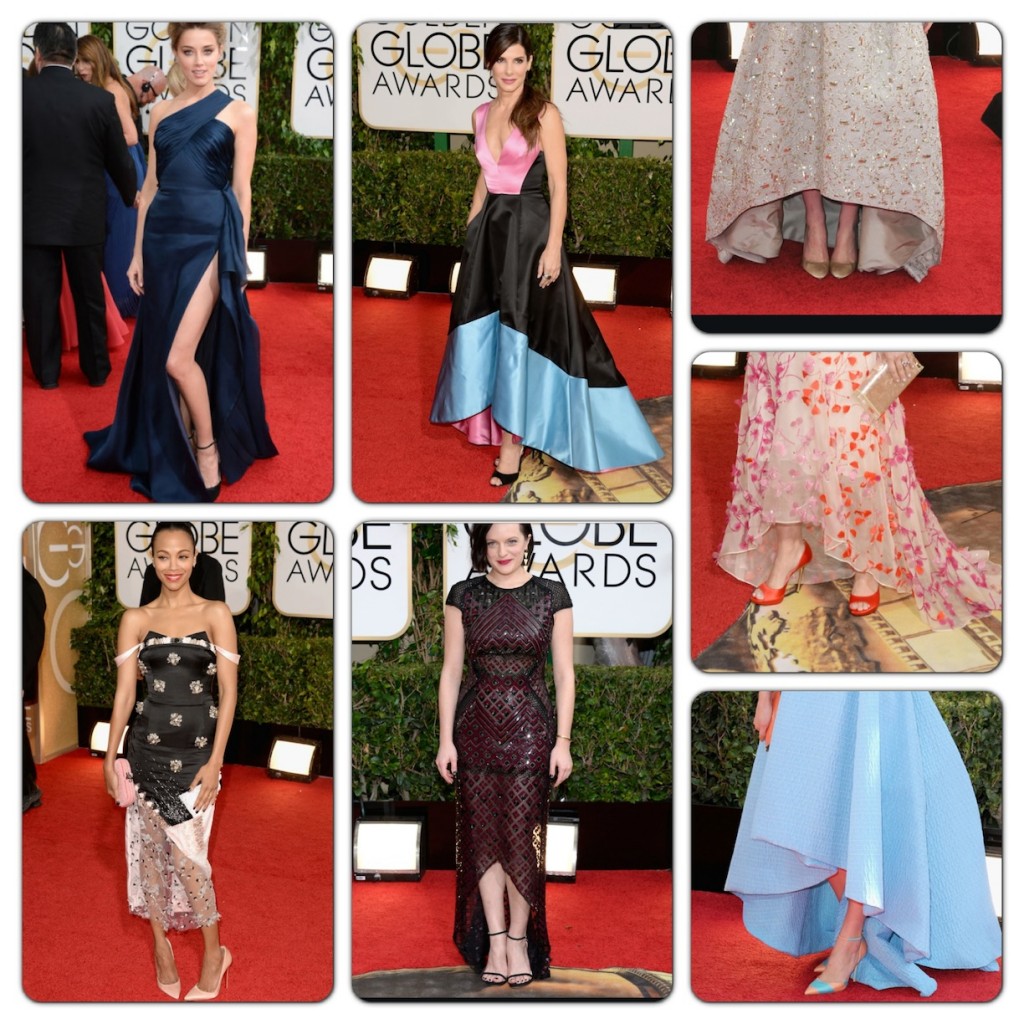