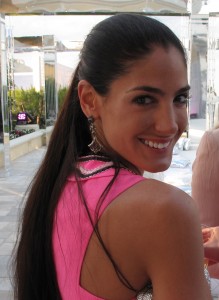 Maria’s fashion career began in 1999, when she sent her fashion portfolio to Anna Wintour at Vogue. Ms. Wintour is famous for spotting talent and Maria was hired soon after by Allure Magazine. She spent her early fashion years mentored by some of fashion’s legendary editors. Notables such as Polly Mellen and Paul Cavaco helped shape and refine Maria’s exceptional talent before moving from Conde Nast to Hearst Publishing. Her career continue to blossom, eventually moving to position of fashion editor at Marie Claire, where she happily remained for a number of years. Maria produced and styled a vast number of the magazine’s fashion pages, becoming one of their most valuable creatives until the end of 2006, when marriage to a British TV Producer saw her move to London. There, along with work for high profile clients ranging from Cartier to Diesel, Maria broadened her skill set further as a regular talk show guest presenting trends on iconic British show Richard and Judy.

After three years in London, Maria, her husband and three beloved dogs sought sunnier pastures in California. Since her 2010 move to Los Angeles, Maria’s extensive editorial background has made her one of the most in demand stylists, not only for magazines, but also a number of high profile celebrity clients, who rely on her for all their red carpet and fashion needs.

Most recently, the birth of her son in 2012 inspired her to start her own blog, redsoledmomma.com, where she shares style advice for fellow fashionable moms.